Red Wing may not be a household name in boots, but based on its history it probably should be. Originating in Red Wing, Minnesota, the Red Wing Shoe Company prides itself on creating quality footwear that satisfies your everyday needs, much of which, according to its purpose, involve the outdoors. However, when making your selection of Red Wings for your outdoor work or adventure, be careful to research before you buy. Though many of Red Wing’s products do boast their waterproof property, not all of the company’s shoe line comes with this feature. This article will provide all you need to know about Red Wing boots and how to choose the pair that is best for you.

Shoes for Every Man 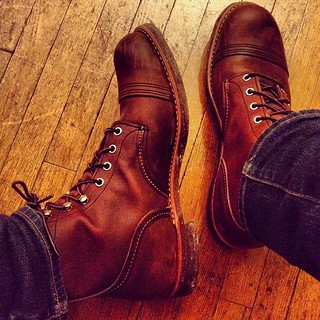 The Red Wing Shoe Company was founded by Charles H Beckman in 1905 with the goal of producing comfortable, long-lasting footwear for workers in the most brutal conditions. Loggers, miners, farmers, and other workers in similar outdoor industries comprised much of the Company’s clientele. Due to its popularity and success producing quality boots, it was not long into the company’s life, only 10 years, before Red Wing became the chief producer of boots for the American troops during World War I.

Over the years, Red Wing has sought to maintain its focus on craftsmanship and longevity. Red Wing’s current CEO proudly states that his company is the sole footwear producer that has a hand in every step of the creation process; Red Wing participates in every detail, from the manufacturing of the leather to the sale of the final product in a retail store to ensure that the customer receives the best possible product. In addition, much of Red Wing’s leather goods are produced right here in the United States, which adds to its transparency and accessibility.

Which Red Wing Is Right for Me?

Today, Red Wing not only produces boots but clothing and accessories, and offers a separate line of women’s footwear to accompany the original men’s. Thus, Red Wing truly has maintained its goal of bringing a quality product to everyone.

Though the initial question implies that Red Wing is known for its waterproof products, it actually took a bit of digging on the Internet to find information about the brand’s waterproof boots specifically. But once you find these boots, you will not be disappointed. Red Wing’s official site promotes 123 waterproof options for men, ranging from a $99 white polyurethane boot to the Burnside, an 11-inch waterproof boot with safety toes that is priced at $349. Women’s waterproof options are notably limited however, with only 6 results in this category on the website, and all of the safety toe variety.

The myriad options available under Red Wing’s Work heading are daunting to say the least. From Safety Toe to Soft Toe, insulated vs. non-insulated, and features such as Electrical Hazard, Static Dissipative, and Puncture Resistant, you can basically buy a custom boot to fit your exact needs. For those who don’t feel like picking apart the multi-word descriptions under each image, Red Wing’s site assigns convenient little icons to each product to indicate its functionality, such as a snowflake to indicate insulation and a water droplet to show that the product is waterproof.

And “Work” for Red Wing does not solely apply to the industries of its original heyday; today, the company also produces shoes designed for indoor service work, such as non-slip shoes for kitchen and restaurant workers.

The Red Wing Heritage collection was launched in 2007 after a successful partnership with J. Crew. This selection of shoes and boots is designed for the modern wearer, and is intentionally more stylized and less practical than the Work line of footwear. Like Red Wing Work, the Heritage collection offers products for both men and women. For men, options range from Rough & Tough tall leather boots to Weekender Chukkas in oil-slick leather; several varieties of oxfords are available as well. Women can choose from short leather boots in pastel colors, heeled lace-up boots, and airy strap-forward shoes, among others.

Red Wing Accessories, Apparel, and Other

In addition to its flagship boots and shoes, Red Wing offers accessories, apparel, and shoe care products. Accessories sold on the company’s website include wallets, belts, laces, and gloves, while available apparel ranges from logoed T-shirts to socks and wool hats. You can also buy tools to care for your Red Wings shoes and boots, either as single items like a tin of leather conditioner or a leather brush, or as a handy kit containing multiple care products in a reclaimed wooden box.

On its site, Red Wing promotes four other footwear brands that were founded on the same beliefs as its own.

Available online at https://www.irishsetterboots.com, Irish Setter products are            designed for those who experience the outdoors in all kinds of ways, from       hunting and hiking to working construction, and need their boots to last as long          as they do.

This company’s goal is to serve workers, focusing on their safety and comfort.      These products are closest in design and purpose to the Red Wing Work line,       and are available at http://www.redwingsafety.com/safety-boots/filter-worx.

Founded in 1872, the S.B. Foot Tanning Co. specializes in craft leather and          originates in the same town as Red Wing. More information can be found at    http://www.sbfoot.com/

Where Can I Purchase Red Wing Products?

As mentioned above, all products discussed in this article are available from the official Red Wing Shoe Company site, https://www.redwingshoeco.com. There are more than 500 Red Wing storefronts located across the country as well. Red Wing products can also be purchased from over 700 authorized retailers nationwide.

With its unique story and diverse selection, the Red Wing Shoe Company is proof that just because you need a functional boot does not mean you need to sacrifice style or personality. When you buy a Red Wing boot, you know that you are taking part of American’s history home.

Are Timberlands Steel Toe? Are Blundstones Waterproof? Not what you think!